Research on centenarians is focusing on the most rapidly growing age group of the older population. Centenarians have grown by a factor of 22 from 1950 to 1990 in industrialized countries. Meanwhile, a substantial number of centenarian studies has been conducted all over the world with a focus on genetic, physiologic, and medical issues. However, few data about the psychosocial situation of this age group are available, especially in Germany. Results from representative samples of extremely old individuals are particularly important to determine the requirements for an adequate social and economical support, at present and in the future.

The Heidelberg Centenarian Study assesses objective and subjective quality of life and their interrelations in five domains:

From a lifespan perspective, the following specific research questions are addressed:

The Heidelberg Centenarian Study is population-based, i.e., all centenarians of a given geographical area were contacted (see the red area on the map). 172 cities and communities were contacted and asked for names and addresses of persons born in 1901 or earlier. 475 persons were nominated by the cities and communities. 281 persons were eligible. 125 persons (44.5 percent) could not be verified (they died in the interim or their data did not correspond to the information provided by the registries (e.g., some were younger than stated)). A direct contact was established with 156 persons or relatives. Of this group, 65 individuals or their relatives refused participation because of obvious dementia, severe health problems, psychiatric disorders, or lack of interest or because they considered the interview to be too stressful. Ninety one centenarians agreed to participate (face-to-face interview; see Participation levels 2). 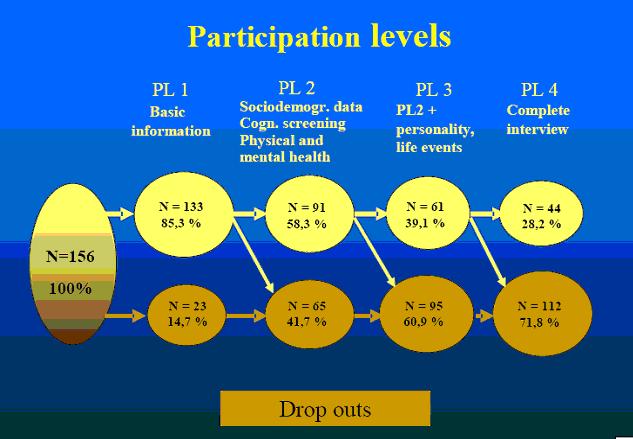 Data are obtained from the centenarians, a proxy, and a trained interviewer. After 18 months, a subgroup of individuals was again assessed with a subset of the T1 measures. Moreover, participants are followed by contacting their proxies every 6 months till they die. The data collection effort allows a comparison between the Heidelberg Centenarian Study and the Georgia Centenarian Study.

Most of the 91 participants (face-to-face interview) were women (85 percent), very frequently widowed (78 percent), and about 3 of 4 had received an elementary school education. Nearly half of them lived in institutions (e.g., a nursing home) and 20 percent with relatives.

• Dementia in centenarians is not a necessity: The results of the modified version of the Mini-Mental State Examination reveal two extreme groups. There are centenarians who did not show any signs of cognitive impairment, but also centenarians with extreme impairment. The prevalence of dementia in this study is 52 percent. The data underline the assumption that the variability of the cognitive status in the oldest old is still very high.

• Functional limitations are a widespread phenomenon in centenarians. At least 83 percent have to be considered as depending on nursing care.

• The German Long-term Care Insurance considers only functional impairments as a cause of providing professional care, not cognitive impairment. If the combination of functional and cognitive impairment ("functional competence") is taken into account at least 20 percent of the centenarians would receive more support as covered by the official system.

• The maintenance of autonomy and independence of the oldest old population is at high risk especially due to the coexistence of functional and cognitive impairments. The gap between the nursing care granted by the official system and the actually needed support lead to a substantial involvement by the relatives.

• Centenarians overestimate their functional health when compared to the evaluation that informants provide. But, self-rated health and proxy-rated health are based on different sources: Informants mainly rely on ADL capacity whereas for centenarians mental health and not physical health is a crucial issue.

• The physical and cognitive functions of centenarians show a continuous decline with increasing age (Individual Growth Curve Modelling). Additionally, a significantly accelerated decrease in cognitive functioning was found in the close proximity to death (0.5 years before death) which is in line with the hypothesis of a terminal-decline (e.g., Berg, 1996). A significant drop in physical functioning began much earlier, namely 1.75 years before death (Rott & Wozniak, 2006; Wozniak, 2005). However, there was also a significant interindividual variability in cognitive and physical development indicating that both biological as well as person-specific factors influence cognitive and functional status at the end of life.

• In spite of substantial cognitive and functional limitations centenarians reveal a high amount of well-being, especially with respect to a positive valuation of their lives.

• Recent analyses show that centenarians are as happy as middle-aged and older adults of the Interdisciplinary Longitudinal Study of Adult Development (ILSE) (Jopp & Rott, 2004, 2006).

• Moreover, personal resources such as health, social network and the personality trait extraversion were found to have a direct impact on interindividual differences in happiness. However, when including self-referent beliefs such as self-efficacy or will to live in the analysis, these factors served as mediators: The impact of the resources was mostly mediated by beliefs. The results demonstrate that protective mechanisms are still effectively at work in centenarians. Additionally, there was no indication that psychological resilience reaches its limits in this extremely old age or that phenomenon such as psychological mortality may become more frequent in centenarians (Jopp & Rott, 2004, 2006).

Einstellungen [Happy at the age of 100: Exploring the role of resources, beliefs, and attitudes]. Newsletter des Deutschen Zentrums für Alternsforschung, 7(1), 4.

longitudinal analysis from the Heidelberg Centenarian Study. Archives of Gerontology and Geriatrics, 39, 143–56.

positiven Anpassung von Hundertjährigen [Physically frail, but psychologically resilient. Predictors of adaption in centernarians]. Paper presented at the 18th Meeting of the Developmental Psychology Section of the German Society for Psychology, Heidelberg, Germany.

positiven Anpassung von Hundertjährigen [Physically frail, but psychologically resilient. Predictors of adaption in centernarians]. Paper presented the Annual Meeting of the Section of Social and Behavioral Gerontology of the German Society for Gerontology and Geriatrics, Hannover, Germany.

in very old age. Paper presented at the 59th Annual Scientific Meeting of the Gerontological Society of America, Dallas, TX.

Rott, C., & Wozniak, D. (2006, May). Physical and cognitive functioning at the frontier of the human life

presented at the International Conference on Aging, Disability, and Independence, St. Petersburg, FL.

Jopp, D., & Rott, C. (2004, November). On the impact of resources and self-referent beliefs on successful

aging: The sample case of centenarians. Paper presented at the 57th Annual Scientific Meeting of the Gerontological Society of America, Washington, DC.

und Einstellungen [Happy at age 100? – On the role of resources, beliefs, and attitudes]. Poster presented the Annual Meeting of the Section of Social and Behavioral Gerontology of the German Society for Gerontology and Geriatrics, Hamburg, Germany.

Paper presented at the International Conference “The many faces of health, competence, and well-being in old age: Integrating epidemiological, psychological, and social perspectives“, Heidelberg, Germany.

Alter [On the variability of depelopmenal trajectories in extremely old age]. Paper presented at the 16th Meeting of the Developmental Psychology Section of the German Society for Psychology, Mainz, Germany.

population-based investigation into the dynamics of quality of life in very old age. Paper presented at the 6th Meeting of the International Centenarian Consortium, Honolulu, HI.

the biological pressure of very old age. Paper presented at the 55th Annual Scientific Meeting of the Gerontological Society of America, Boston, MA.

A population based investigation into quality of life in very old age. Paper presented at the Workshop of the International Centenarian Consortium, Boston, MA.